Well the Big-W LED strings are out on the shelf and yes they are different to last year. 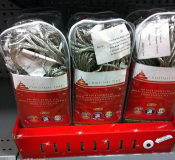 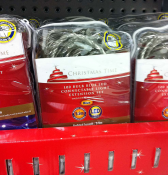 The LEDS have 10 connected in series with 20 LEDS making one section due to the two channel wiring, for the strings with an average 100mm spacing each section is 2M long.

All colours are the same this year (thanks Geoff) with resistors being used on all series groups.
All wiring is clear insulation and it will remain to be seen if this survives in the aussie summer.

Reports are already occurring of variable build quality and i have had the same experience, the white string i have has an intermittent series group that would normally see someone take them back as not working.

Whilst the initial build quality looks ok with all LED's having heat-shrink over the solder connections, this is not sealed.

The 8 function controller actually take the incoming AC and rectifies this with four diodes wired as a bridge but NO filtering resulting in a pulsed DC wave form.
The two channels are controlled with a CT-55M IC (no info found) and the channel outputs use PCR406 SCR's wiring for each half cycle, at least it looks that way.

For comparison between supplied AC adapter and DC use, actual Light Output readings were taken, these are only relative for the measurements. 10 Leds were measured and the average value used.

Measurements:
The supplied adapter is a big heavy AC-AC transformer rated at 22V and 10W.

This will be common for all colours.

DC power.
Just turned on - 25.1V DC
55 LUX - 28.2V and 3mA - this reading is the DC voltage needed to achieve the same brightness as the supplied Adapter

My variable supply max is 32.3V
At this voltage the current had increased to 15mA (still short of 20mA) and the LUX reading was now 200 LUX

The supplied resistor used is a 200 Ohm value.

So at 15mA the resistor will drop 3V exactly with the remaining 29.3 dropped across the 10 LEDs giving each LED a average Vf of 2.93V.
This value is for Cool White only.

DC Power
Just turned on - 17.2V DC
15.5 LUX - 23.8V and 4mA - this reading is the DC voltage needed to achieve the same brightness as the supplied Adapter

My variable supply max is 32.3V
At this voltage the current had increased to 12mA (still short of 20mA) and the LUX reading was now 37.7 LUX

The supplied resistor used is a 1000 Ohm value.

So at 12mA the resistor will drop 12V exactly with the remaining 20.3 dropped across the 10 LEDs giving each LED a average Vf of 2.03V.
This value is for Red only.

Conclusion:
With regards to the likely best voltage to use with these leds, it would seem to me that from 32-34 volts would be a good range. This is can be achieved by using a 36V SMPS and adjusting the voltage down.

If you want to combine with 2009 versions then 33V may be a good compromise between all the colours with some being a little overdriven and some being under driven.

In light of this i'm going to order a couple a couple of 36V SMPS for my own use.

Thanks Phil - Interesting that the controller is driving the leds so conservatively!

That CT-55M controller looks hard to find. A lot of the controllers from previous years used CT-55H which looked like a rebadged CDT3398. A google of that IC shows up some app circuits like you are describing.

Does the controller 'remember' its last setting when it is powered down? Wonder if that's the difference betwen M and H variants..... anyway I guess its a moot point since most of them are destined for the parts bin!

I did some testing on strings I purchased, but did not check the in string resistor values.

The following list gives the voltage across the string (200 LEDs) for 1 mA LED current (dull, but lit) and the individual LED current (mA) at a string voltage of 30V for each of the colours I checked.

Regarding the quality, so far I have only fornd found 3 sets with 1 segment of unlit bulbs in 30-40 sets, so I am happy with the quality.

Hope this information is of use to some. Note that there must be different resistors in the cool white icicles and strings.

It would be really good to find out the resistor values used for each of the strings if you can.

For use with DC and Pwm controllers moving up to 32v would improve the dimming range by 40% over using 30v. It would be good to document the calculated values for 20ma and also 32v.

It's so much better on the dark side

Given the test you have done I have done some calcs and would appreciate if you could check that they are correct.

Did some further checks on various colours at higher currents and voltages.
Firstly, it appears that all colours apart from Red have 200 ohm resistors including the cool white icicles which behaved differently to the string of the same colour.

In light of additional measurements on different strings, some of the previous values have been adjusted.

Looks like you real life measurements match closely my theoretical calculations for 20mA, thank you for doing those measurements as it is important to know if we are going to successful use these lights.

The Icicles are behaving like they have 11 LEDS per section

I double checked the icicles, definitely only 10 bulbs/section in the drops I counted. Sections consist of 7+3 in 2 drops alternating with 6+4 also in 2 drops. I also checked for as second resistor - but did not find one. I presume they are a different LED batch from the strings, or have a different characteristic.

While the 2010 LED strings may comfortably handle a higher voltage, I will be running mine at 30V. There is not a big increase in apparent light output at the increased voltage and my boards have some mixed channels of 2009 & 2010 LEDs.

Beacy said:
Given the test you have done I have done some calcs and would appreciate if you could check that they are correct.

Yes, the extension sets should be half the current.

Personally i would leave the calculations in Amps as controller channels are usually in amps, and build some margin in and calc at 20mA this covers variations in batches.
A 20 section string @20mA/sec will draw 400mA.
Another way to look at is for 1A channel you could attach 500 LEDs

Has anyone got the pictures of the colours of these lights? Would love to have a look if possible

Edit:
Dont worry about the colours, just went and bought a heap today. Now I know

It's so much better on the dark side

During testing or since did anyone seen what is causing this faults in the sections and how to possibly fix them.

1. Out of 13 packs of Cool white I have just opened 5 have faulty sections and there is an easy fix I will do it.

2. At this rate Big W is going to have a huge amount of returns - if we can fix them we will have a huge source of very cheap lights

Seemed like a faulty connection on mine . 1 of them would turn on if you squeezed them while still bundled, the other I would imagine would have done the same but did not try.
T

Now you have to go back and buy them when they put them on the discount shelf.

so thats 3 blue an 1 cool white sets of 200 that i brought.
big-w watch out here i come, this time i'll find a power point in store an test them before i buy them

well that was my luck, hope others have better luck
B