Best way to set up a Nautilus Forest

I am thinking of trying to make a small version of the Nautilus Forest this year. I loved it in Sydney's Vivid a few years ago and want to emulate a mini version. If you haven't seen it, here is a link to a you tube video:


My issue is that, If I build it, I am unsure of the best way to set it up in Xlights and would welcome any thoughts/suggestions.

no idea how to set that up in xlights, but it would look cool

My name is Graham & I love flashing lights!

They kind of look like icicles or peace stakes but just physically arranged differently. might have to be 3d layout to get that depth of field effects

That's what they are. I have a run of 10 meteors 500m long each with 32 lights, I need to set up a model that I can give me the sort of effects in the video without programming each meteor separately which would be a pain.

I'd have to say your best bet would be a custom one that you've got to make yourself that matches the layout of your pixels in your meteor tubes when they have been built into a prop. I wouldn't think something already exists to match that sort of design, seeing as it's completely custom.

It is in effect just 10 meteor tubes. I can use the existing meteor model in Xlights that allows me to do some things but I don't think it gives me the ability to do the fancy chases that the Nautilus Forest has. I may have to go a different route, but not sure what..

I believe what you'd want to do is set up the layout of data flow but in physical locations so when you drop an effect onto the prop, Xlights knows physically where the props are and can work out what lights to turn on in order to get the desired effect.

That's what I was thinking, but it looks like a big task and was hoping someone could come up with an idea that could save time. Just being lazy

You should only need to do it once, then save it as a model (I think thats how it works, I don't use Xlights) and then you can import that every time you want to use it in your layout. You would need to build them all identical however, or make another model if you plan to build others in a different way.

My other thought was to build a model with 10 strings and program each string separately. This would work if I just wanted each meteor to do the same and, as they were at different heights, it would have a good effect. But how would I do it so that each meteor starts slightly later than the previous one?

@Tonyst
I based my Helix trees on the same Vivid display.

xLights Mapping
Yes it is definitely a Custom model.
I also mapped a Matrix for each Helix as a shadow model. 10 wide x 15 high each - Most of the effects were done on the shadow model.

Construction
I made mine by attaching 10 pixels to 15 arms for a single helix and returned the data signal back to the plug (4pin +5v, neg, D-Out,D-In)
I made a custom wiring harness to suit each helix.
The trunk of the tree has provision for two helix's offset by 180°.
I also wanted the arms to be removable - similar to a regular internal decorative Xmas tree.
Each arm is offsite from the ones above and below by 45°, to allow the arms to be removed (some are quite tight to pass in and out)
Arms are made from 5mm round bar with angle's varying as they elevate, so pointed horizontal at the base, and almost straight up at the top. (different than the Vivid ones)
Mounting brackets are 30x30 angle (from memory), with a slot in the top that the branches drop into to stop rotation.
Pole is 50mm tube about 1500mm high.

Here are some build photos ... 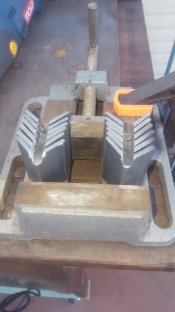 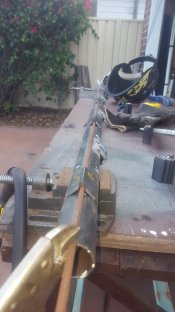 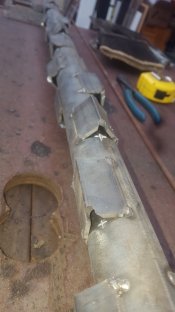 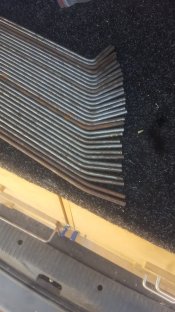 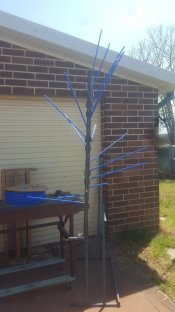 and some video ...
Single Helix


I was planning on showing this at the 2020 Sydney expo as part of my Custom Models talk, but, we all know what happened then.

It's been a while since I've popped in and had a look around here. I guess it was meant to be.

I've also attached my xLights model to give you an idea.

Anyways, I hope it helps someone.

Brilliant, Dave. I'm glad someone else got inspiration from Vivid.

I have knocked up a prototype from $5 of Bunnings plastic pipes, so I have gone down the cheap and cheerful route. Here is my attempt: 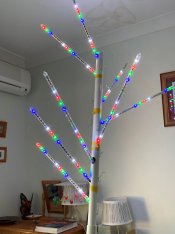 I was thinking of making at least 4. Not quite as many as they had at Vivid. But certainly your double helix is more impressive than mine. If I can get it going anything like decent, I will add more tubes. What length tubes did you use? 50cm?

Of course, now comes the hard part with building a model in Xlights. My post was a cry for help!!! I hope that I will be able to get some good ideas from yours. Many Thanks.

@Tonyst
I couldn't attach another file to the above.

Here's one of my branches. Just pixel bulbs cable tied to the bar. 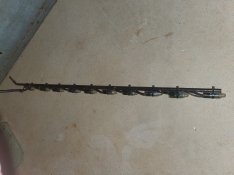