There has been a great amount of chat lately of the HP Server 12V 100 Amp PSU, in particular from some of the people in this hobby from the USA.


Background;
I have been using a number of the Meanwell LRS-350-12 PSU in my display and in particular for some dense pixel props like my MegaTree have used up to 3 or 4 of them inside a enclosure which has been working great and no issues at all over the past two seasons.
One of the reasons I have no PSU failures so far is I am not running them all the time at 100% capacity and mostly only around the 50% capacity for a number of reasons, one in particular even though I don't run pixels at 100% brightness I do try and design my display to run close to this for safety reasons and a nice margin for error etc when I am determining the current draw of my display.
Now before you say, I run 2000 or whatever amount of pixels from one generic type Chinese 12v 30 amp PSU, or 5v is better cause they are more efficient etc and haven't had a issue yet, this is probably fine and I am not expert in this and like many aspects of this hobby there is multiple ways of achieving the same outcome ie make our pixels flash in time to the music . Wow that sounded like some kind of disclaimer.

Now it seems these server PSU have been used for a number of years for various other reasons after they have been removed from their intended use, which is a number of them powering servers.
I have seen these used for powering bitcoin mining type setups, used in the RC hobby for powering battery chargers etc and now of later being adapted for use in this hobby.

I purchased a number of these and on first inspection they do appear a nice option for a 12v PSU in particular the price if you start doing a comparison $ / Amp compared to say the Meanwell PSU's.

A couple of downsides to these server type PSU is that they require a little modification to be used, ie to output 12v and the outputs connectors don't have a simple way of connecting any cable to. Now some people have fitted a resistor etc across the required outputs and managed to solder suitable sized cables to the outputs but this seemed a little messy for me, but again there is multiple ways of achieving the same outcome.

The solution to this to use a Breakout board which has modification to allow the server PSU to output and also allow easier cable connections etc.

There is a couple ready made options available after a super quick search, some are on Ebay and such and advertised for https://www.ebay.com.au/itm/Breakout-Board-Adapter-compatible-with-HP-460w-750w-1200w-Server-Power-Supply/113887543079?hash=item1a8439ff27:g:rp8AAOSw7PNdfEgW and a couple of other similar options which seemed ok.
I was concerned by the current capacity of each one of the outputs as they list the outputs as up to 14 AWG which could be ok.

I then noticed these breakout boards 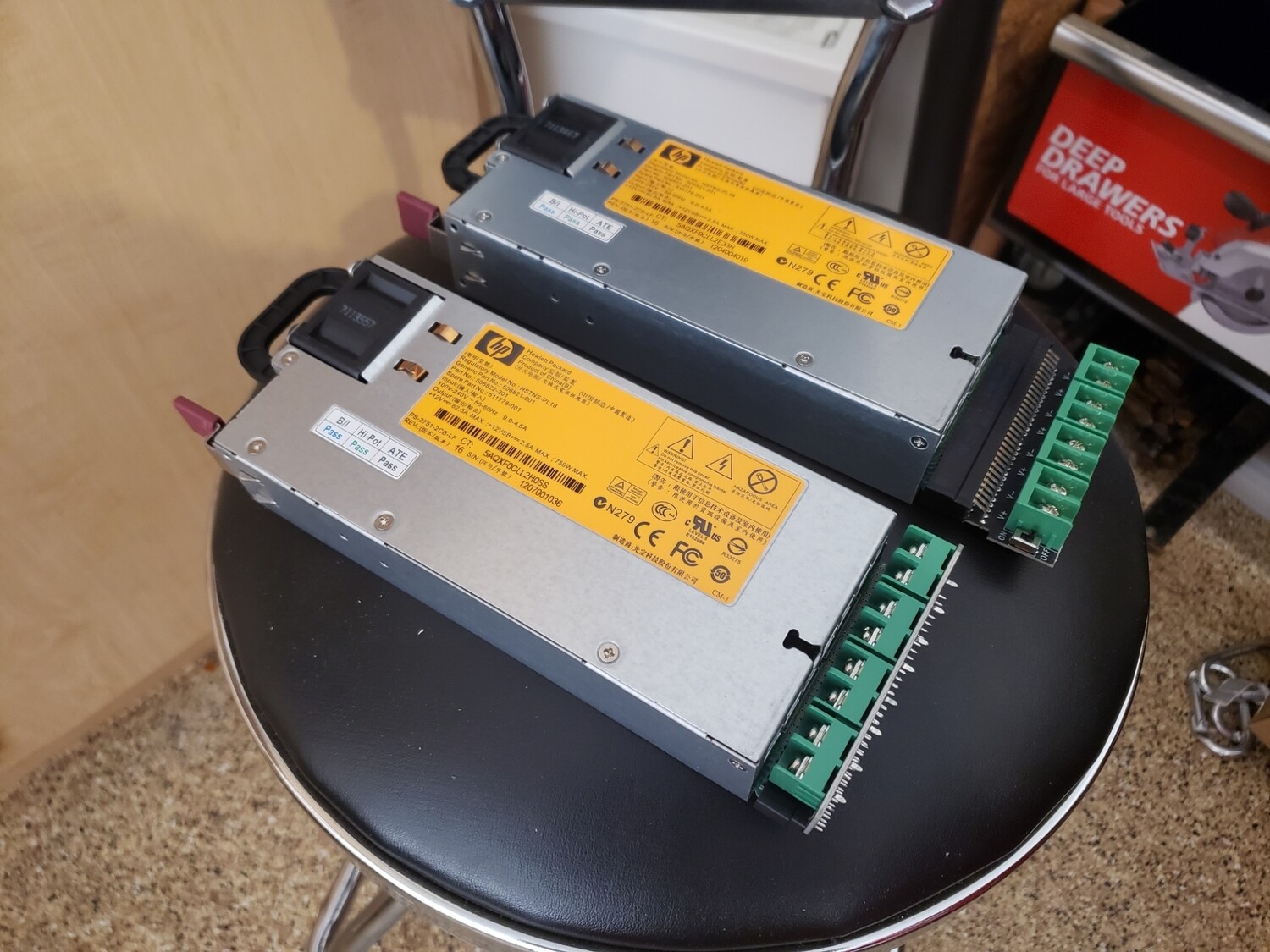 As of May 2020 these breakout boards changed to using barrier style terminal blocks. The vertical option no longer requires flipping the power supply as these terminals can fit between the board and power supply. This breakout board works with the common HP common slot server power supplies such...
jboards.ecwid.com

These did seem a little more suitable for my needs in particular a small board and each output capable of up to 32A and allows up to 10 AWG according to their website specs , and since I have noticed there is a couple of other options like with fuses and vertical connectors etc.

I received the Server PSU and was pleasantly surprised they all seem in great condition as per the sellers listing with not obvious damage etc.

The first thing I noticed was the actually size of them, they are smaller than I first thought which is handy.

Here is a size comparison


I then fitted the breakout board which was simple as it just slides on the Server PSU outputs (it is a snug fit) and supplied 240v power via a IEC C13 style lead (commonly used for PC power connections and other type of electronics, you can purchase from various outlets including Bunnings! https://www.bunnings.com.au/jackson-1-2m-replacement-iec-power-lead_p4420134

It powered up as per it should with the fan running all the time (which seem to have a very good airflow) and the green LED indicating powered on.


I then checked the output voltage, and as expected was slightly over 12V, this one measured 12.31V with no load.


I was curious to see if this voltage would drop with some load applied, so I connected up some 12V lights etc I had handy and was pulling just on 40 amps from the server PSU.

There was a very slight voltage drop measured at the outputs 12.29V (could also be variation in multi meter) again I am no expert.


So all appeared ok, and I left it running like this for about 45 minutes and use the temp of the server did increase, all seemed ok.


I then adjusted the PSU with the same load applied to 12V (I wont go into details on how to this, just saying be careful of what instructions you find on the internet as there seems to be a couple of variations of this type of PSU). Some would say the slighter higher voltage wouldn't be a issue, but I also adjust my Meanwells close to 12.0V so wanted to do the same with these.

I will give my quick Pro vs Con below (again I am no expert).


Pro - Size about the same as Meanwell


Con -Secondhand and no history of actual use (every seller will say they have had limited use!)


Note the above Pro about the AC type connection could be one potential major potential benefits of the Server Type PSU as a premade lead can be used (or purchased) and no need for a suitably qualified person to make the connection from your 240 AC lead to the PSU, also the Meanwell PSU has exposed terminals for the AC and DC outputs unless a cover is used this could be a potential safety issue and remember electricity in particular higher voltage AC is deadly so please be safe.


Other Notes: The Server PSU maybe be easier to replace if a PSU fails as both the input and output connections are plug in, the breakout boards is a snug fit but could be easily swapped over with out disconnecting the cables etc.

Note on Breakout boards, they seem to be a relative good design with a good feature you can only connect to the server one way, ie you cant physically fit this type on the incorrect way due to he arrangement of the connectors. However they do have exposed low voltage connections on the rear on the board which should be covered up to prevent any possible short circuits on the low voltage side. I made a very simple 3D printed cover, its nothing special but covers the exposed connections on the board (pics below).

No doubt there is lots of other factors to consider, but this is just my quick thoughts so far. If you do consider using a server PSU please use a suitable fuse between the output connections and your pixel controller as these PSU can provide more current than most pixel controller boards can handle, ie each power input on a Falcon F16 V3 is about 30 amps and if you was using one of these server PSU it could exceeds this maximum unlike a Meanwell PSU which is only 29 amps. But again some people don't run power through their pixel controller and this is a topic for another day, I do just saying and like I mentioned above there is multiple ways on achieving the same outcome in this hobby and I am not a expert.


If also using one of these server PSU please ensure your IEC C13 style lead is suitable (the server PSU has the specs on the label) ie don't use a cheap lead that is not suable, the HP server PSU I have listed as for 200-240 AC input is 7.8 Amps.

The final couple of points are of course the HP server PSU are second hand, they have been used and like anything they could be duds and failure within minutes, or they could last a very long time where as the Meanwell PSU are new, also quick point on the Meanwell PSU, pleas purchase from a reputable seller as there are copies for sale, again a topic for another day.


You need to purchase multiple items for the server PSU and thus more potential freight charges and some of the well know sellers of Meanwell PSU do offer free freight for some orders. (Arrow.com is generally where I have purchased the Meanwell PSU's from).


So finally what does all this mean, not sure to be honest but I am just posting this to maybe give you a option for potentially cheaper PSU's for your display when using 12V pixels and maybe help offset one of the negative aspects of 12V pixels.


Also I do have a couple of these HP Server PSU for sale (I purchased more than I need as a bulk buy), please see the for the for sale thread here if you are interested.


They will be 12.0V adjusted and come with the Breakout board and 3D printed breakout board cover, but like I mentioned above they are second hand,

Thanks for reading this long thread and I apoligise for all the icorret gramma and speeling and typo mitsakes.
Last edited: Feb 3, 2020

They are good. I have an excess of them that make it suitable for this. Just another thing I don't have to buy

I use supermicro ones myself and out of the factory they are 12.0v spot on. I have load tested these server PSU's for quite the while! 112 amps @ 12v. and it only dropped to 11.99v under load 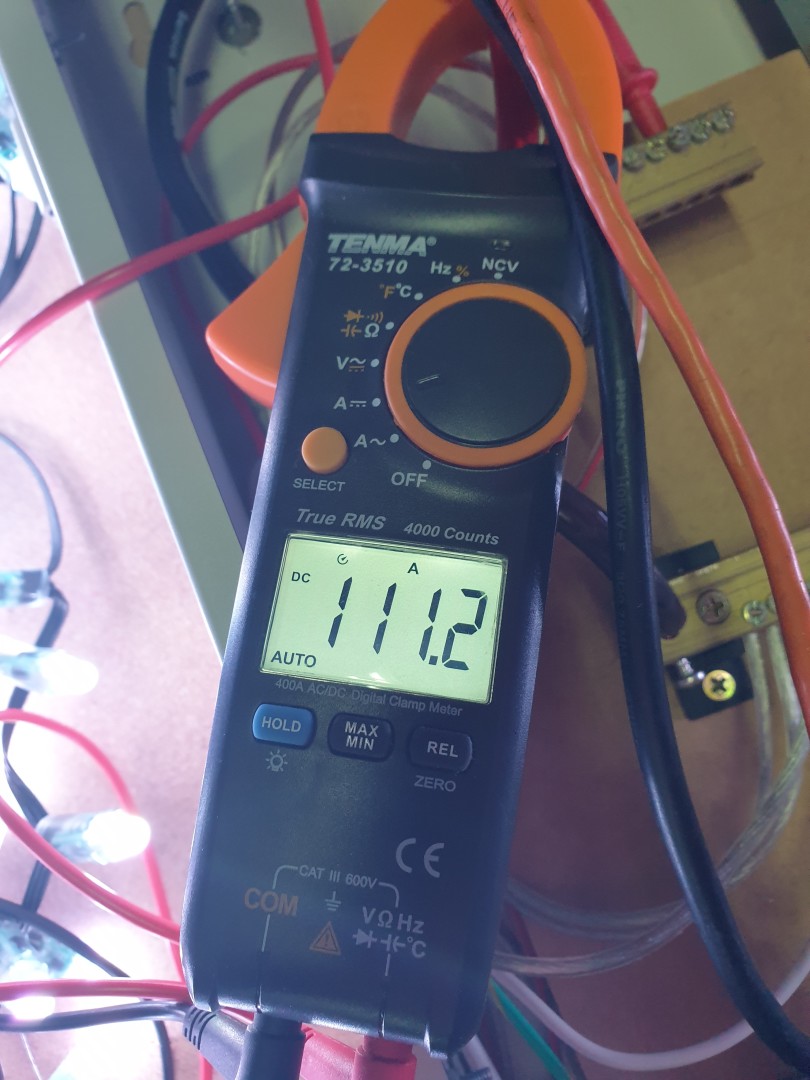 I decided to go the more permanent approach however so I can utilise more of the power supply. 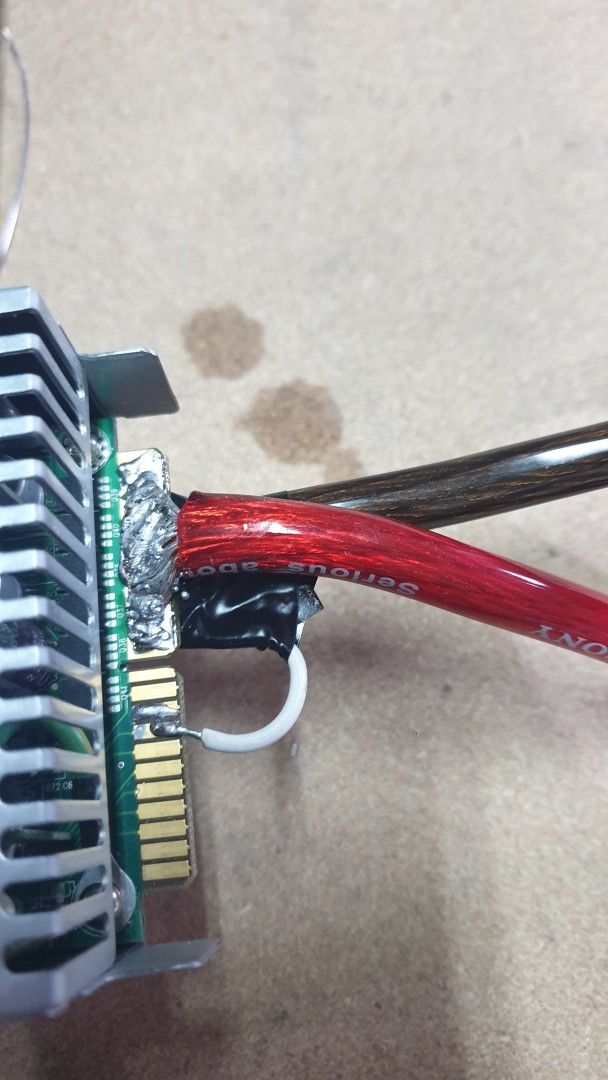 This box worked fantastic to power my megatree 5,800 nodes on one power supply @ 30% brightness.

My first Christmas and 1600 pixel megatree was done with these power supplies... good value, particulary if you need a fair whack of currrent.

Still use the meanwells for locations that don't need that much current.

I ordered two from the USA ebay seller, and one was DOA, so they sent a replacement at no cost to me

If you are after a mounting solution for these HP Server PSU's, there is one available on thingiverse you can 3D print

This bracket is used to mount an HP server power supply to the bottom of an Ord Bot. The power supply I used is a 750 watt supply part number HSTNS-PL18, but I believe the more popular 1200 watt supply may share the same dimensions and fit as well. Use 4 M5x10 screws and matching t-nuts to mount...


I printed a couple to test fit etc in PLA and they seem to work ok, just a snug friction type fit which would be ok for horizontal mounting

One mount would probably hold it ok, but make your own decision