Well yes but the brightness thing still comes into play, COBs don’t usually come in colours so there would be no point using those with a 2 wire controller, and other LEDs are probably too dim…

In case anyone is interested I've been researching and looking for ways to plug this all together. I've bought 4x 20W COB LEDs from Ali Express. The specs are probably a bit exaggerated as usual but I figure one will give me around the same brightness as a 100W halogen. If not, I can run 2 per enclosure at 80% or whatever. 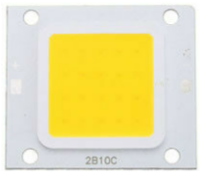 These COB LEDs are actually "manufactured" with multiple smaller LEDs on the one board (hence chip-on-board or COB). Because of that you can find them in various series or parallel (or both) configurations, mix-and-matched (during manufacturing) to be almost whatever voltage you prefer. I've chosen 36V because that seems to be one of the common voltages for power supplies and LED drivers.

Now to the driver. Ideally you want a constant-current LED driver, because as LEDs heat up (and COBs heat up quickly!) they draw more current, and as they draw more current, they heat up, and you can get a runaway happening. However, you can use a typical (constant voltage, although they're called regulated) power supply connected directly to the COB if you have to. Nevertheless for 20W of LEDs in such a small package you need to cool them well. I'm counting on the large metal backing plate of my pool fitting to transfer the heat into the water... Wish me luck!

To dim the COB LEDs you usually use a driver with a 1-10V input for a trim pot (which is what you would connect for a typical wall switch dimmer) and the driver takes care of dimming the LED. You can however use voltage PWM if you're not using a constant-current driver to dim the LED, and I figure because it's modulating, it will keep the heat down a bit, and I can always set a max limit of 80% if I have to. This is what I was going to do with a Meanwell LRS-75-36...

As for the Christmas display integration, I am going to use the Hanson Electronics 2811DC15. I only need 2 channels but I can repurpose it later if I change my mind. This will take the WS2811 feed and give me a PWM output on up to 15 channels, but I'll only use one for each pool light, so 2 total channels. (May put some garden lights up with the rest). All I have to do is get a 36V power supply to feed into the 2811DC15, and connect the output to my LED...

That is, until I found this little doohicky: It's a Meanwell HBG-100-36, IP67 rated constant-current LED driver. 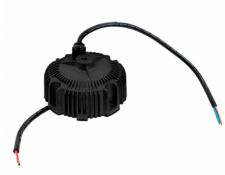 But the kicker is it can dim with a PWM input as well as the usual 0-10V variable input... (maybe they all do this but I never came across it before) which means I can connect the parts like this:

This means I will have to run the 2811DC15 from 10V to ensure it outputs the correct PWM voltage to the driver, but that is fine.

Maybe I don't need the extra driver and I could just control the LED with voltage PWM, but I like the constant-current protection from over-heating.

Hopefully I can plug all this together in February for a test!

My COB LEDs arrived some time ago, and the Meanwell drivers I purchased from Power Supplies Australia arrived last week. So here is a quick test of one 20W COB LED from AliExpress.

It's hard to get the brightness on camera as all my cameras auto-adjust, but these are seriously bright. I'm hoping one is equivalent to around 100W of incandescent light, and it sure feels like it.

The driver is fairly responsive to a 100K Ohm pot I'm using for dimming, but whether it will be good enough when I hook that up to my lighting display, who knows. Even if it's not I'm more than satisfied with the project as a cheap pool light replacement! And if they fail soon, then it was a huge learning experience. This was a nice end to a busy weekend!

Here's the LED on an aluminium plate. The bulldog clips are just for holding it to the plate with thermal paste underneath: 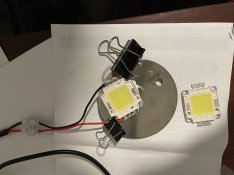 Here it is on at low brightness: 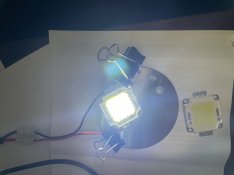 And at full brightness (not that you can tell in the photo, but it is a vast difference):

Here is a video:

It’s slowly getting more permanent! Now all I have to do is solder the terminals, waterproof the new seal, and put it back in the water… 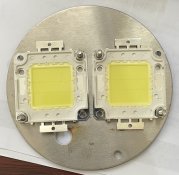 here’s a video of me adjusting the pot manually:

Wow, that's impressive that you can light up the entire pool with only a few of those pool lights. I'm looking forward to seeing sequences on it.

Thanks! Unfortunately I didn't realize this dimmer only goes from 10% - 100% so there's no "off". I'll have to see if it washes out the pixels or not, and maybe add a relay in the mix.