Hi, not sure if this is more of an arch build, a power supply, or a power injection thread so I'm going to dump everything in here . My intention is to showcase some preventative checks and measurements so you too can prevent fire

I've built the 2.5m tube 1.5m arch setup as detailed by cdjazman but managed to screw it up (the strips ended up being about 20mm too long *head desk*)

I have custom 3D printed feet and the arch is maintained by 110lb fishing line.

I'm now sorting out the power control and thought I'd document that.
I've got it all in a box, I want to figure out under full load if that box needs venting so it's sitting in the spare room on with a zigbee thermal probe inside the box and another one outside the box.

I was finding that despite being 12v it wasn't making it the full 15 meters, I'm not surprised, so I've started power injecting.

Before power injection I was using a thermal camera to poke around the connectors that I'm using and saw they were getting a bit warm but after injecting that seems to be a lot more sensible - I can totally recommend stretching your budget for a cheap thermal camera - tho don't get the one I got the date and time keep resetting and if you don't notice before you start taking photos you can't figure out which order you took them in.

These first two temperatures come from the first injection/data, it's still got the dodgy connector they include, I'll swap it out before it goes outside, and that's a soldered board connection not one of the above connectors - for reference. 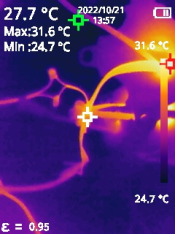 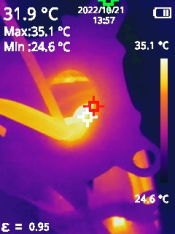 This is from the second power injection, the wegos for anyone who wondered how they handled 3.5 amps 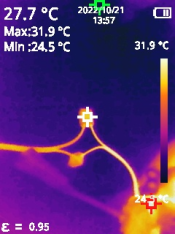 This is where the injection actually enters the strip - it is a bit warmer (at 3.5 amps) than I'd like and I'll be checking it again later but I suspect if I add another injection point between this arch (the second last one) and the start of the the prop (I have injection points available at each arch) but 45 is well in spec for these connectors, isn't even softening the hot glue. The second photo is at the end of the first or second arch just checking the temperature of the connections between arches. 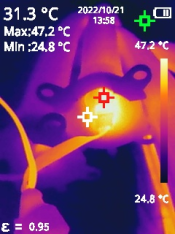 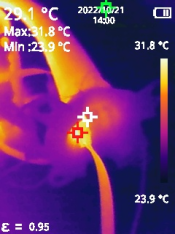 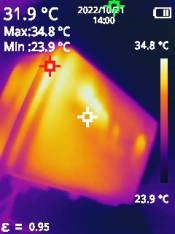 Two parter because I could only attach 6 files to a single post.

This is the result of half an hour worth of testing using the "test" button on the smart differential controller, which I note is running the LEDs much harder than I would be normally (show brightness is around 30%)

TH01-A is in the room just sitting on a cardboard box (so it's not on the cold floor)
TH01-B is in the enclosure. 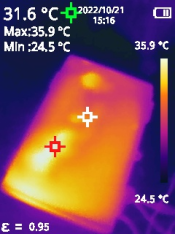 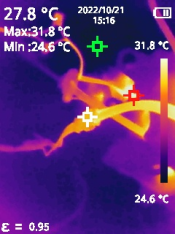 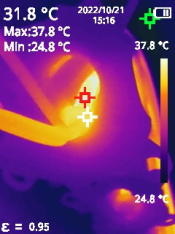 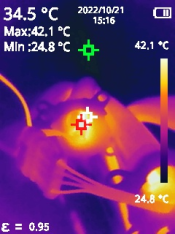 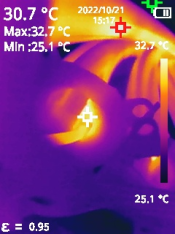 I'm not going to lie, I'm a smidge concerned about that 42 degree reading but that could actually be the pixel itself given this time I measured the other side of that power injection point (upstream) and it's around 30 degrees so I'll have to get a macro lens for my thermal camera - I'm getting 30 degrees off the pixels through the tube.

The enclosure appears to be around a 9 degree delta so I might be able to avoid putting vents in it (seems the sensors only send through updates when the temperature changes.

The temps concern me a bit. Being an Aussie summer at Christmas the lights are likely to be turned on when the ambient temperature is on the wrong side of 35C and it's possible that your arches will have just been experiencing direct sunlight which can push the temps up higher. The arches at least will likely only have something like a 10% duty cycle so that they won't appreciably increase much in temperature. If the power supply enclosure is going outside and particularly if it will be exposed to sunlight I would definitely add a vent.
F

Thanks for agreeing with me (like, sincerely, it helps validate my theories ), I have 6 vents and a couple of fans in the mail, I'm hoping I can just get away with convection but fan forced is an option. I can bring the connector temps down by adding more injection points - the beginning of every arch supports injection I'm just using the one ATM.

It's worth mentioning I'm only checking these connectors because I've previously had similar connectors overheat and melt in a pure white lighting environment - but that was using expensive high CRI, high powered LED stripping and purely my fault for not actually fully considering the amount of current.
You must log in or register to reply here.
Share:
Facebook Twitter Reddit Pinterest WhatsApp Email Share Link
Top