I bought a couple of the Animated Crawling Zombies from Kmart. Thanks @David_AVD and @LawrenceDriveLights 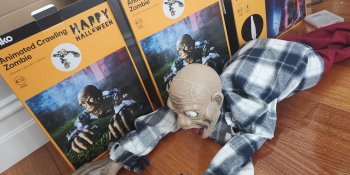 They look great and pretty cheap.
As David said they are sound activated but need a rap across the head to wake up which is not ideal.

So I pulled one apart and found the electret microphone just on the shoulder. 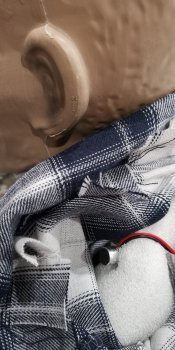 Shorting the microphone does trigger a start, so a possibility is to connect it up to a PIR but wasn't sure what the long term effect would be on the circuit.

So I pulled apart the control box to have a look at the circuit. 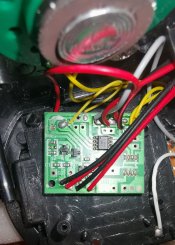 Tried tracking down the 8 pin ic on Google bit no hits.
Tracing around the tracks it does like a picaxe/pic controller.
The eyes and speaker are connected together to one of the output pins and the motors are driven via some transistors by another pin. The microphone is also connected to a pin via a transistor.
It has one of the pins shorted by a piece of wire and there looks like there is a button pad that has been soldered over (assuming for an alternative version with push to start)

If I was going to play with it further I'd probably clean up the button pad and try a switch there, however....

As with all of these cheap props and toys the wiring and soldering is not great and I was worried I'd break wires by moving it around too much and without knowing anything about the code or specific chip I didn't want to break it by shorting and cutting wires.

Final thoughts I will probably either use another prop (I have a monster in a box that rattles and makes a hell of a noise) to trigger it or replace the batteries with a dummy AA 4.5v supply and have that connected to a PIR.

Nice work on the reverse engineering so far.