KiwiPhil said:
looks great, is the PET UV safe? I imagine many weeks have gone into printing those up!
Click to expand...

PETG has been widely used by 3d printing enthusiasts for display props now for quite a few years with little discussion on prints failing from UV. So whilst i haven't personally got any testing for PETG under the belt I have placed a couple items outside for sun exposure.
A item printed and used for the xmas season is likely to get around 8 weeks (bit longer for us slackers at pulling stuff down) and will last a number of seasons at a minimum.
How they bulbs yellow over the season is my biggest concern/interest.
I've got about 3 weeks ties up in printing the c9 covers but only a couple days printing the strip mounting hardware.

Time for a new topper as I have increased the number of strings being used and the old one had got warped.

The old one was made by laminating some plywood between two sheets of steel... to lighten this one up a little as it would be bigger i used some 3mm Alu treadplate.
Printed out some router guides then really just used them to set the radius on the router circle jig. it can be fun routing aluminium especially all the little flakes that seem to go everywhere.
Next was to drill all the holes and about now i remembered to get a couple of photos. 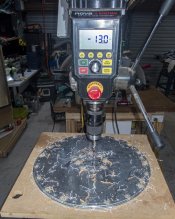 secured to two plates to some scrape mdf and using a drilling template not in this photo initially drilled all the pilot holes at 3mm, went back and drilled the bolt holes for M6 at 6.5 and then the hook hanging holes at 8mm top, 9mm bottom plate 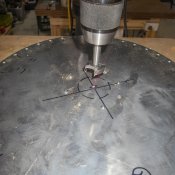 The center hole for the star mount pole at 32mm was drilled using a 32mm tungsten carbide forster bit.

the near end result is below, the 3d print is done in ABS and you can see how the strings attach to the topper. 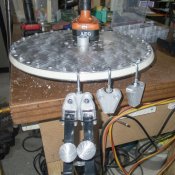