As usual I tested with my trusty PIXAD8 and my da_E131 software. One set had two duff modules (red only went down to 10% on one, same but green on another) while the other set was all good.

They are quite bright, as you'd expect having 6 LEDs in each module. I was thinking they may be useful as a strobe effect (on white), but I don't think they have quite enough punch for that. The module to module wire spacing is also only about 100mm, so probably a bit close for a strobe string.

They are 6803 protocol, so are supported by most controllers. Being 24V, they should pull less current (less voltage drop in the cable) compared to using pairs of 12V modules to get the same brightness.

I think they'd be great for making a VU meter or other multi-cell display element where the 100mm spacing would work. Actually, maybe they'd also be useful as single modules in smaller display elements like corostars, etc.

Anyway, the idea was to buy some, test them and give a review, so job accomplished!

EDIT: The colour order on these modules was GRB, not RGB. I have added the wiring colours to the wiki: 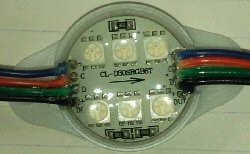