I bought a solar powered Santa boot light today at Bunnings. It's 31cm x 32cm and was $19. As usual, I got it home and pulled it apart as I intend to use it with a DC power supply instead of the solar panel.

It has 24 red LEDs that make up the power part of the boot and 16 white LEDs for the upper section. Interestingly, each LED has it's own series resistor (1K for the reds and 2K for the whites as far as I can make out).

The output from the solar panel / battery (3.2V 250mA Lithium Ion) measured 3.3V. I'm not sure if it would be higher once the battery has been charged (in the sun) for a couple of days as recommended. The LEDs were visible, but not all that bright. Maybe that's intentional to get the quoted 6 hours run time per night.

I chopped the light off and ran it from my bench power supply and found that at 3.3V, it draws about 35mA. At 5V, the current rose to approx 80mA and the LEDs look much brighter. That's still only an average of 2mA per LED !

Pushing to 12V (briefly) resulted in a current draw of 300mA (7.5mA per LED average). There's not way to tell what the rating of the LEDs really are and the series resistors are only 125mW, so I don't think running them on 12V for extended periods would be a good idea. 5V should be fine though. 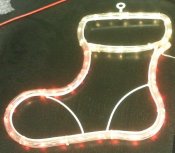 It does look better than the washed out picture above suggests.

I Have C.L.A.P and its very infectious

Just couldn't help yourself, could you.
Had to pull it apart as quick as you opened the box it came in.
Bunnings do seem to have a lot of solar stuff at the moment.

They do. I picked up one of the santa stop here signs, havent had a good look at it yet though

Some of the solar lights are not bad, apart from the solar powered part! I did the same last year with various solar and battery powered sets. I hope that documenting them here may help others use these items in their static or animated displays.

You could treat each of these boots as a light string that runs from 5V. So you could run it off any of the DC controllers available and have a common 5V supply to power many of them.

David_AVD said:
I chopped the light off ...
Click to expand...