Hi I haven’t set up my lights for 4 years but have decided to do so in my new house. I have been dabbling in pixels but am unsure what controller I can use to turn on/off my dumb lights such as rope lights when I want to run my animated sequences. i was thinking of plugging these rope lights in something like a LOR Ac controller and just turning these channels off when it’s time to run the show and when it’s finished to turn these channels back on. I’ve read through some of the threads but can’t see anyone who is doing this ( or at least I don’t know the best way of doing it). Can anyone suggest some options?

ps sorry if this is in the wrong section.

Whilst you mention Dumb lights and LOR AC in the same sentence, there is some key info missing and it's required before any valid advise is given.
PS: you cant just plug the plugpacks transformers into say a LOR board, though using an AC relay to just turn the AC on or off could well do the trick.

Is this what you're trying to achieve? https://auschristmaslighting.com/threads/9545/
I did this by using DC controllers, central power supplies and removing the low voltage plugpacks that came with the strings of lights. I posted a list of details of the light sets that would help me guide you here: https://auschristmaslighting.com/threads/14138/

I'm not sure whether this is what AussiePhil means but if you use a relay (which requires a DC controller to control it) then I suggest using it on the low voltage output side of the plugpack and not the AC input.
D

Thanks you both for the replies. To explain better.

The lights I am looking to turn off before my show will commence are a mixture of 240v with just a direct plug into a power point and some others that have a transformer which converts them to 24v. They are all just off the shelf from Bunnings, Kmart etc. I may not be using the correct terminology but let’s call these the dumb lights. They are all leds including the rope lights. At the moment these all run off power boards which are then plugged into timers so that they all turn on at around 8pm and off at 11pm.

In addition to these lights I have pixels which run off a P12r but what if find is that when the light show runs, I don’t get the effects I want as there are all these dumb lights flashing in various parts of the display. So what I want to do is use something other than a timer plugged into the PowerPoint to turn the dumb lights off at a certain time, have the pixel light show run via Xlights and at the conclusion of the show, have the dumb lights turn back on. It is too difficult to do this via the timer as I find it doesn’t keep the correct time and gets out of sync with the Xlights show. So what I was thinking was to connect all the dumb lights into the outputs on a LOR controller which I would then be able to connect to Xlights and before the pixel show started, I would turn off the LOR channels via Xlights which would then kill the power to the dumb lights. Then back on the same way. Pretty much the manner in which I used to do mini trees before the advent of pixels.

I sold the LOR controller years ago and the new ones are very expensive, so was wondering if there was another way to do this.

Easiest way could be to get one of those computer power monitor devices that shuts off things that are plugged into it when the computer goes to sleep, I believe it takes a 5V signal from one of the computers USB ports. You could use something from Hanson Electronics line up of pixel/dmx controllers to send a 5v signal instead of plugging it into a USB port. This would allow you to switch on and off the lights as you require using Xlights. It also involves zero mains voltage work as the unit is a device already built, plug and play.

The only link I could find that really makes sense is from America, but you should get the idea of what I am talking about. http://www.pwrusb.com/powerUSB-smart.html

Thanks for the advice. I will check it out

I know exactly where you’re coming from - traditional plug in lights is how I did my first year as well.

My solution was to source double poll power boards with USB ports. Opened them up and removed one of the two copper connectors under each switch and wired instead to an external relay. Used the usb to power a raspberry pi zero w that operated the relays, and controlled via wifi. The whole thing fitted nicely into a Bunnings outdoor power box.
This worked brilliantly and needed both the relay and the power board on for the circuit to go live. However not recommended for safety reasons, unless you have some qualification around 240v. Photo below 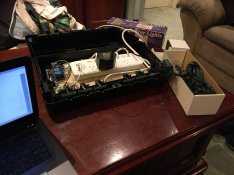 Arlec have now brought out a wifi power board that is probably a better option https://www.bunnings.com.au/arlec-grid-connect-smart-4-outlet-powerboard-with-usb-charger_p0074829
D

Hi SarahD. Thanks for the idea. Will see what the easiest/safest is.
appreciate it.
I

If you want to use relays, my suggestion would be to leave the plugpacks powered on continuously and put each relay between the plugpack and the lights. If you've bought the lights from a reputable source then you should be working with a safer voltage if you do it this way. Obviously you need to check that the lights are low voltage.