Mark_M said:
I have the data sheet for the regulator. It's 6.7v that is dropout.
No more spoilers til I film the magic smoke!

Mark, can I interpret that as saying I can run pixels off a single power input until I exceed 7.5A (wire safety rating for 18AWG I think), or the voltage drops to 6.7V using the Spiker lights calculator? http://spikerlights.com/calcpower.aspx. Regulated pixels are 0.64W, and effective wire gauge is 23 AWG (from the excellent Ni Christmas lights video at View: https://www.youtube.com/watch?v=GpiZQLdzYbI&t=0s
).

So what does this mean for wiring my props? Noting that a safety margin above 6.7V makes sense, - I'll get better colour consistency with less power injection points with regulated pixels - you can go around 1.5 x further at 30%.

I've got a 1400 pixel matrix to plan the wiring for, and this gives me more flexibility and confidence in power injection location choices (doing 2 x 700 pixel runs on separate ports). Using the calculator, I now know I could do 2 injection points each and 200W power supplies at 35% brightness, whereas with resistor pixels, I'd have been limited to 30% and an extra injection point.

Thank you - and feedback welcome if I've got an incorrect assumption in the above. I've highlighted the numbers, as they're going to be a useful rule of thumb for me to refer back to.

SarahD said:
Thank you - and feedback welcome if I've got an incorrect assumption in the above. I've highlighted the numbers, as they're going to be a useful rule of thumb for me to refer back to.
Click to expand...

Your assumption about the wattage of a resistor pixel is drastically wrong, and will lead you to expensive overdesign. A resistor pixel purchased today (vs a few years back) will use at most 300mW full white at 12V, and this will drop to around 200mW as the string length increases and the voltage drops and the pixel wastes less energy.

merryoncherry said:
Your assumption about the wattage of a resistor pixel is drastically wrong, and will lead you to expensive overdesign. A resistor pixel purchased today (vs a few years back) will use at most 300mW full white at 12V, and this will drop to around 200mW as the string length increases and the voltage drops and the pixel wastes less energy.
Click to expand...

Hey - thanks for the feedback. I don't have resistor pixels so looked at specs on a few sites which all said it's 0.24W/channel = 0.72W. Is there a video or some measurement you can point to that shows the actual power consumption for resistor pixels?

There may have been a day when that was the common spec for resistor... but didn't the Ni videos show it to be less?

Modern resistor bullets/flats use constant current driver now, and they're a bit "wimpier", but use a lot less juice. Take advantage of that and you'll save a lot of time and money on wire, ports, power supplies, etc.

Anyway, my measurements are posted on this site here:

So I've got my RPi, and a Hanson Pi Hat which arrived a week ago. I'm looking at Ray Wu's store on Ali Express, getting very confused by all the options. I'm wanting to build around 5x Candy Canes using some coreflute (or similar) with 100x pixels per cane. These will go up on the fence so be...

I do know a vendor that had tags that said the pixels were .72W right on the end... and it was completely wrong. This year, the same vendor's tag says you can only do 120 pixels without PI. So, so wrong; you can do 200+, more if you connect power from the same port farther down the string. 200 only uses 3-3.5A (depending on distance from controller).

Found one of those strings with the tag that says .72W right on the tag. These were acquired last year. They're 6"-spaced that I didn't end up needing. 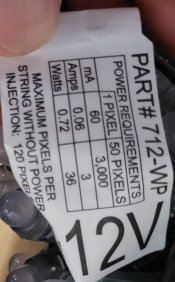 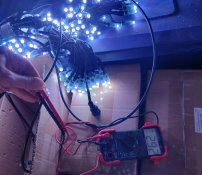 It works. 2.92A only, so 175mW/pixel. At this point the voltage at the end of the line is only 4.66V, so they are getting a bit weak (but note that they don't yellow like the older ones, if anything they get a tiny touch cyan). This is a relatively extreme case because these pixels are a little more wasteful of power than ones I've been getting this year, and the 6" (rather than typical 4") spacing causes more voltage drop also. But 200 is still just fine.

If you simply connect power from the same controller port to the far end of the string, using a common 3M-3M-3F with the data pin pulled out of the middle (which you can leave right on the back of the prop), you can drive 300 12V resistor pixels at full white with no issues. Takes almost the full 5A (depending on distance to controller). 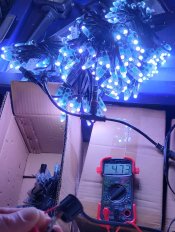 The closest thing I can do with Spiker's pixel power calculator is this: 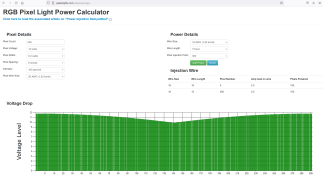 This is a first approximation at best. In reality, the pixels waste a lot of power over a certain voltage. The ones at the end of the string are using more than .2W, the voltage drops quicker, and the ones in the middle use less than .2W... so the curve isn't precisely this.
You must log in or register to reply here.
Share:
Facebook Twitter Reddit Pinterest WhatsApp Email Share Link
Top