I really liked the RGB spinners that Bevo and kool-lites posted about. I was thinking that it would be nice to make an 8 spoke one using 6803 (digital) RGB strip.

To make construction and wiring easier, an 8 output controller could be housed in the centre hub section. Whilst a PIXAD8 would work, it's a bit of an overkill for only a few channels per spoke.

For example, 500mm spokes would only be 5 pixels (15 channels) each, for a total of only 120 channels. 5 pixels (15 RGB LEDs) spokes would allow "ring" effects (grow / shrink) in addition to the "spin" effects used with non-digital strip versions.

Anyway, I thought I'd put the idea out there. I realise that it's getting close for this Christmas, but it may interest people for next year. Never hurts to throw ideas around any time of year!
X

Another great idea David
I look forward to seeing the results

that sounds to me more like the firework type lighting where they burst from the center to the tips. does sound like a good idea, but more for 2012 at this late time

Yes, you could do a fireworks effect too. Using pixel strip is more expensive than regular DC strip, but I think there's room for both types in the fun world of Christmas.
B

Let your Light Shine before men

Great idea David.
I am hoping to get into some pixel strip next year. I cant wait to see what else other people are coming up with this year.

Haven't started the board design yet. Maybe this weekend in time for for next week's prototype PCB run.

Was thinking of using the same 4 pin pixel connectors as I used on the APC718 and Ed used on the PIXAD8. Also just a single fuse / polyswitch for over current protection as each output will only be driving less than 400mA worth of strip each. Will also have a DIP switch for easy addressing, a pair of RJ45 connectors for P-DMX and a separate DC input as well.

Not sure on PCB size yet. Will have to see how much room the output connectors and 12V regulator chew up. Hopefully small enough to fit inside the centre hub piece of the spinner.

I had another display idea for a board like this. Same hardware, different firmware.

Each of the 8 outputs could drive a column of 5 or 6 LED modules / pixels. The 8 columns would make a spectrum analyser display (vertical bar graph) like you see on some car / home stereo units.

To make it simple to sequence, just one DMX channel would be used for each output. Each channel would split into 5 or 6 level ranges with increasing level values lighting up more of the vertical bar, like a VU meter.

Another DMX channel could perhaps select the overall bar colours, or select a mode where the lower modules are always green, the 2nd highest is yellow and the top is red.

Anyway, just thought I'd throw the idea out there while it was still fresh in my mind.

David thats a great Idea. I looked into this for this year but using digital tube instead of strip.
You could also use it on the meteor lights too

As for the fireworks light. Im looking at doing 2 or 3 of them for next year. But I havent worked out the whole thing yet. But probably 6803 strip up the pole then RGB meteors sticking out of a center hub or something like that anyway.
Depending on the max channel count on this board I think it would work quite well

Here's what I've come up with: 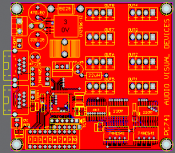 Prototype boards were ordered today. Should have them back later next week.

Did anything happen with this?

David, with steve, did anything happen? Would love to GET MY HANDS on this one, be great addition to fireworks

I would like to know as well, since i would love to have som pixel spinners!

I'd like to see support for the TLS3001 and the CYT3005, same protocol, strings and strips. These are 12 bit but when driven from 8 bit source using a gamma of 2 they have a much better dimming curve than 2801's.

For many including myself, the price is an important factor and its only being used for christmas lighting and not for video signage so issues like lack of dimming steps and less colours really doesnt make the top of the list when selecting and in reality the extra cost can be hard to justify when the audience watching the display will never tell the difference.